5 Things to consider when selecting a flight school

Aviation, together with the whole global economy is currently weathering through a major storm. Air traffic has come to a near halt around March and is now slowly picking up again. For those who aspire a career as a professional pilot, the question arises: is it still a good idea? And, if I decide to pursue my dream, what should I watch out for when selecting a flight school?

Flight training is expensive, and that comes as no surprise: one-to-one instruction and fuel prices make training costly. In general, flight training to get all the necessary licenses to apply for an airline costs around 100.000 Euros when you train in Western Europe. When attending information sessions of flight schools, inquire about any costs that are not covered such as landing taxes, exam fees, flying equipment (headset, flight bag, school uniform) and so on. If you receive “avoiding” answers on questions about extra costs, be suspicious and request a detailed breakdown of the costs and clearly ask what is included and what not.

2. Check what after care solutions the school offers after graduation

Pilot demand continuously goes up and down. This is due to economic cycles, seasonal variations (many holiday airlines start recruiting in October-November to have their crew ready by Springtime for example). On top of that, it is hard to predict the exact graduation moment when starting flight training because flight schools don’t control the weather. Some flight schools offer free license and skill extensions (licenses have to be renewed every year) for their graduated pilots. When visiting flight schools, ask about the after-care solutions and whether they are included in the price. This way you avoid unpleasant surprises after graduation.

Some flight schools provide “after care” programs that maintain the skills and licenses of their graduate pilots.

3. Check who the flight instructors are

Flight instructors are a major cost for flight schools and one that some schools try to save money on. They do so by hiring very young, inexperienced flight instructors. There is nothing wrong with young, motivated instructors, but there should at least be a good mix between young and experienced instructors. Especially for the more “advanced” stages of the flight training such as the instrument rating, the twin-engine rating and the multi crew course (MCC), it’s important to be instructed by people with experience, ideally as a commercial pilot. Especially pay attention to flight schools who hire their graduated students immediately after they graduate, as this is often a way for those schools to earn some extra money on their students and keep the instructor costs low. “Instructors should not be one month smarter than their students” is a good general rule.

4. Check aircraft types that will be used for training

Check out the “fleet” page on the website of the flight schools you are looking at. Look for average fleet age and whether the aircraft feature “glass cockpits” or not. Glass cockpits refers to the instrumentation that is fully digital. On itself, there is absolutely nothing wrong when the first stages of basic flight training take place on “conventional” cockpits, featuring analogue instruments, it can even be good to start with the bare basics, but at the advanced stages, training with the latest technology is an absolute must. Also beware of flight schools with a lot of different aircraft types: this makes training complicated as trainees have to learn to fly different aircraft at the same time and often indicates a poor financial situation of the school.

5. Check how the MCC (the last part of your training) is organized

The last (and probably the most important part) of professional flight training is the MCC, the multi crew course. In this stage of the training, you are paired up with another flight school student and you will learn how to operate as a crew of a large jet aircraft, having to bring flights from A to B to a good end, while being confronted with complex system failures. The idea is to be fully immersed in an airline environment for the first time and the key is realism: the more realistic the training, the more valuable it becomes. So, make sure the flight school is using a simulator that represents an existing jet aircraft (most commonly Airbus or Boeing) and not a generic-type budget simulator (steer clear of “hybrid” type simulators that pretend to be AIRBUS and BOEING at the same time).

Secondly, ensure that the training is given by real airline pilot instructors, not by inexperienced, young instructors. Many smaller flight schools outsource MCC training to a third party, so be sure to check what the training is like and where it takes place, as it is often in a different country and travel costs are not always included in the price. Also, check out if the school is offering a normal MCC or an APS-MCC. The APS-MCC (airline pilots standard mcc) is a far more extensive MCC program is and is preferred by many airlines nowadays. Choosing a flight training that offers an APS-MCC will enlarge your chances of landing a job after graudation.

Your shopping list of questions to ask when visiting a flight school:

When investing a large sum of money in your future, you deserve to be well informed. So, when planning a visit or an information session, be sure to ask the following questions:

Bonus: don’t let the present define your future for the future!

Aviation has been through many crises and will definitely see some more in the future. The Gulf Wars, Nine-Eleven and the credit crunch of 2008 are only some of the many setbacks aviation has known and recovered from. Many more senior pilots are now forced to early retirements and airlines aggressively cut costs to remain in business. The past has shown that a recovery period takes a couple of years and is mostly followed by a massive pilot shortage. Looking at the present to define your future is not enough, take a look at the past as well and pick wisely when choosing a flight school. Pick a school that is there to turn you into a skilled pilot, not one that just wants your money!

Want to learn more about what matters in flight training today? Subscribe for one of our webinars or book a “Skywings Pilot Career Tour” and learn about what it takes to become a pilot. 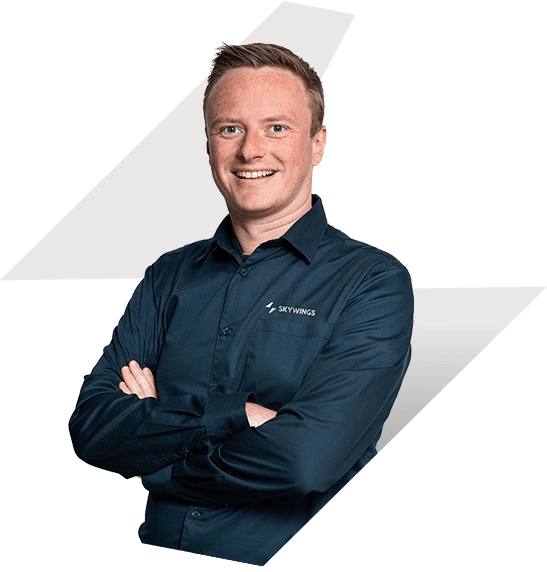 Book a screening
Ask a question

This website uses cookies to improve your user experience. A cookie is a small text file that can be stored in the browser of your computer, tablet or smartphone. Cookies can be placed by both Skywings and selected third-party partners.

If you disable this cookie, we will not be able to save your preferences. This means that every time you visit this website you will need to enable or disable cookies again.

Cookies that are placed by carefully selected third parties. This concerns statistical, marketing and social media cookies. It allows us to analyze the use of our website, to provide relevant advertisements and to offer social media functionalities.

Enabling these cookies helps us to improve our services and optimize your user experience.

Please enable Necessary Cookies first so that we can save your preferences!